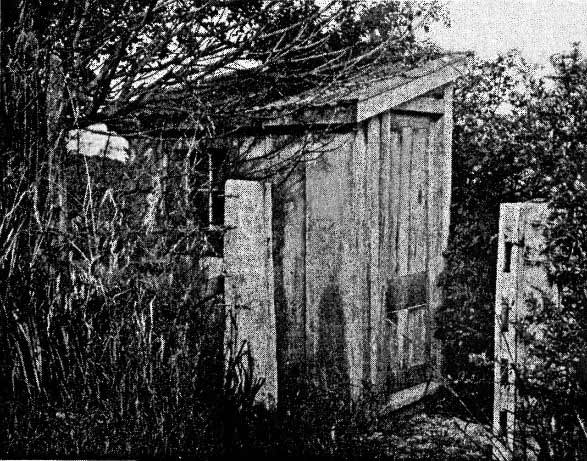 In 1853, George Darroch bought five acres of coastal land at Marriage Bay, on Te Kapa inlet, on the eastern side of Scotts Landing peninsula. On this land he built a house (to become known as ‘Cantyre House’ – see Mahurangi Vignette No.1, above). More importantly, he also set up a shipyard.

In 1867, a small building on the property became the first Post Office on the peninsula, with George as the first postmaster.

In his book “The Rock and the Sky” (the story of Rodney), author H Mabbert records that:

‘The post office was first kept by Mr Short, up to 1865, when George Darroch was appointed at an annual salary of five pounds. The position was held by George and later by his family for 51 years. … The first Mahurangi election was held at this post office in August 1853, when there would have been no polling place at the Heads.

When one takes account of corresponding statements in other publications, some of Mabbert’s statements require one to undertake some mental gymnastics. Clearly, from at least 1853, through to 1865, the postal service arrangements were pretty informal, with Mr Short (who lived on or close to Thomas Scott’s land at the Point) being the caretaker of incoming and outgoing mail. George Darroch, once he was formally appointed as postmaster, would have taken over responsibility for the handling of mail. It may be that there was a time delay before George got to building the first post office structure, or it may be that the correct date for the opening of the first post office building may have become ‘muddied’ with the passage of time …. but, either 1865 or 1867 … take your pick!

Mabbert’s comment that, in 1853, the first Mahurangi election was held at the post office, leaves one puzzled as to ‘which post office’ he would be talking about. Perhaps he’s referring to Mr Short’s premsies, with its the postal collection / despatch facility?

The Daily Southern Cross for 1 December 1870 reported that the New Zealand Gazette of about two weeks earlier had changed the name of our local post office from ‘Mahurangi Heads’ to ‘Mahurangi’:

However, it seems that the local community continued to refer to their local post office as the ‘Mahurangi Heads post office’.

The caption shown at the foot of the above image is that which accompanied the heritage image that was sourced from the Auckland Library. As Denis Willers has noted, the caption is rather misleading. The main building is the old Cantyre Homestead (as it was c.1900 when the photo was taken … well before the extensions and the improvements which followed in later years). With the benefit of later year photographs of the Post Office structure, it is possible (but by no means certain) that the small weatherboarded structure fairly adjacent to the hedge-line might be the post office building.

However, the exterior cladding of that structure seems to be inconsistent with the cladding depicted in photographs taken subsequently. Examples of later ‘close-up’ images of the post office can be found:

At page 205 of the publication ‘Open Windows’ produced by the Warkworth Business and Professional Women’s Club’. Their photo of the Post Office structure confirms that at an earleir stage in its life, the structure looked far more ‘respectable’ than that depicted in many subsequent photographs … but never-the-less, the structure still looks very much like a small garden shed!

On p.217 of RH Locker’s book “Jade River’, there is a photograph of the post office structure that shows the original V.R. nameplate in place on an outside wall of the Post Office. Part of the caption to that particular photograph reads:

“Until 1950 letters were posted at the Mahurangi Post Office under the authorisation of Victoria Regina”.

We also have a photo included in a short, undated, yesteryear article entitled ‘Smallest Post office’ written by Sylvia Vine. In that photograph, the post office structure appears to have become decidedly battered and weather-worn. The author wrote that:

“The old Mahurangi Post Office, disused since the last war, still leads a useful life as a tool shed for a local house owner. It stands under a puriri tree just inside the fence, to the left of the Heads road, about half a mile from the point.

The slot for posting letters is in the wall facing the road and, until a few years ago, when it was souvenired by some determined light-fingered visitor, the V.R. (for Victoria Regina) plate was still in position.

Some years ago it was the fashion to publish photographs of buildings claimed to be the smallest Post Office in New Zealand. This one was never a contender but could well be the winner. [As can be seen from the image above] it is about as big as a good-sized outdoor privy and, but for its prominent position, could be mistaken for one.”

While Vine’s article is interesting to read, it doesn’t let us confirm that the hedge-line shed (or any other building) depicted on the Auckland Library’s archival photograph, is in fact the old Post Office structure. In particular, if one looks at the style and slope of the roof pictured in the photograph in Vine’s article, it is of a style and rake different from those apparent on any building depicted in the archival newspaper image. And the structure depicted in the article (and for that matter, in the ‘Open Windows’ and ‘Locker’ articles) don’t seem to have any weatherboarding on the exterior. We leave you to ponder the conundrum.

Noelle Lipinski (nee Lawrie) has pointed out that photo Vine used shows the structure to be in a location other than at Cantyre. This not surprising as, over the years, the Post Office structure was on several occasions relocated to other sites on the peninsula, before being returned to a site on the Cantyre Estate. For example, there was a period of time when Nelson Lawrie (a grandson of the early settler, James Lawrie) and his wife Betty, ran the Post Office from a location on the Lawrie Homestead property at Ngaio Bay.

In the publication ‘Open Windows’ (referred to earlier), Betty Lawrie recounts that:

“We got paid 26 pounds a year to run the Post office … We met the steamer at all hours of the day and night, in all weathers. We collected the mail, and delivered it back. … The Post Office was the centre of the community and you had a good old talk while you waited for the steamer.”

From the time of their marriage in March 1929 the couple lived at the homestead, until the were able to build their own house. In 1934, they moved from the homestead to their own newly built dwelling, Rose Cottage, which was located at what nowadays is ’35 Ridge Road’. We understand that after the Mahurangi Heads Post Office was decommissioned, the old ‘shed’ stood unoccupied, within the Rose Cottage property, but close to (and viewable from) the roadside.

This understanding is reinforced by the following observations by Sandy Williams, a daughter of Rodney and Pam Smith who owned the Cantyre estate between 1965 and May 1999:

“When Cantyre was purchased by the Smith Family, the post office was on the roadside … [in] Ridge Road. The owner of the post office was a solicitor, Selwyn Clarke, who had promised Rodney he would leave it to Cantyre. Somehow the Historic Places Trust took it and it was moved to the old Ferguson property at … [the foot of] Ridge Road. In the early 1980s Pam negotiated with the Historic Places Trust for it to be returned to Cantyre where it was until the property was sold in 1999. At this time the Smith Family donated the post office to the Museum in Warkworth.”

Having finally got to be retired to the Warkworth Museum, the former Post Office structure was sufficiently restored and given a coat of paint! Here is a photo of the restored structure. 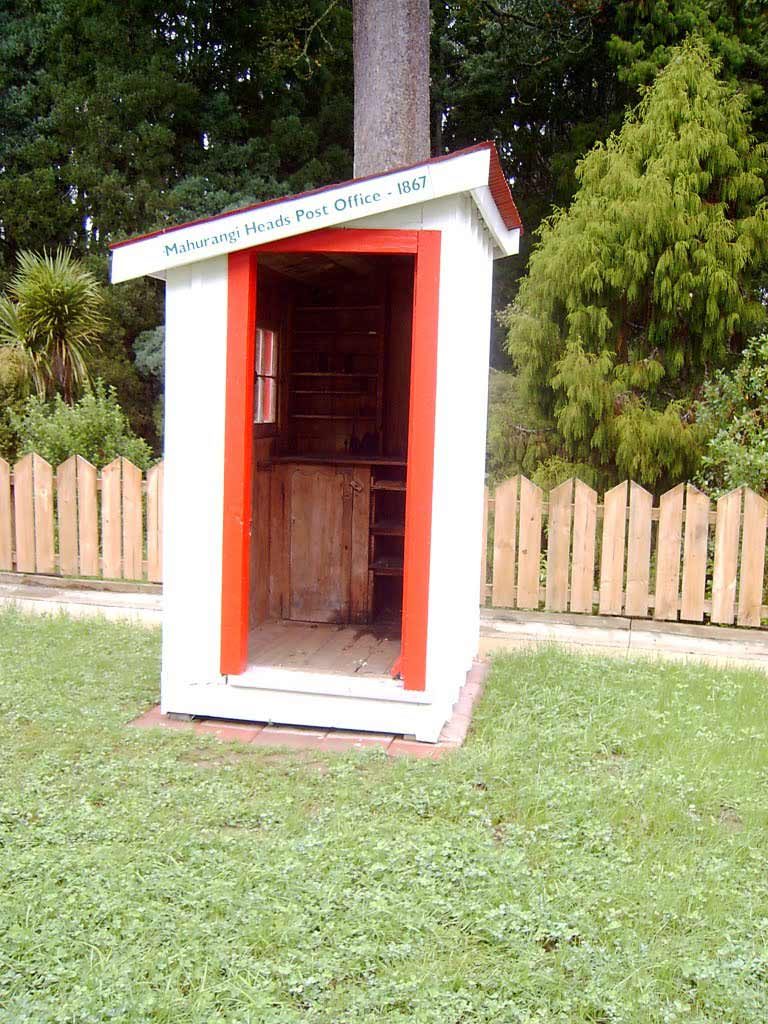 Noelle Lipinski had one further comment to make about the Vine article. Noelle believes that the removal of the V.R. nameplate was not an act of vandalism. Rather, the nameplate was removed by a Post Office official at the time he cleared the building of all Post Office property … including the old rubber stamp used to cancel postage stamps affixed to mail accepted for delivery.

Footnote:
The Warkworth Business and professional Women’s Club publication ‘Open Windows’ is available on request from the desk at the Warkworth branch of the Auckland Library.

Thomas Stuart Scott (and his family)