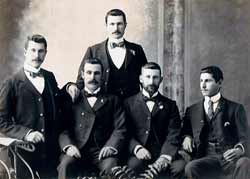 The first Europeans to explore the Mahurangi were looking for Flax and Timber. The British Navy came seeking spars. Spar ships would drop cutting gangs of up to 300 seamen who would enlist local labour. Quality control was an issue and the Navy encouraged the establishment of commercial timber operations. Captain Ranulph Dacre obtained a contract to supply 100 spars and employed Gordon Davis Browne to operate the spar station in what is now known as Brownes Bay. One of several brothers seeking their fortune in Australia and New Zealand, Gordon Davies Browne was involved in a number of failed operations as an adventurer, trader and merchant both in Sydney and in New Zealand. His early operations were with fellow merchants Raine and Ramsay in the Hokianga. This saw the construction of the first sailing ships (the Enterprise and the New Zealander) built in New Zealand and the establishment of the New Zealand Timber Wharf in Sydney. Incidentally it also led to the United Tribes declaring independence and the adoption of the United Tribes flag for New Zealand vessels when the Sir George Murray was seized in Australia as not being a properly registered ship. When the financing for this operation collapsed Browne was briefly involved in flax cutting near Whangarei before being recruited by Dacre to run a timber operation in the Coromandal. He had to be evacuated from there to Sydney due to hostilities with Māori. The settlement in Brownes Bay in 1832 was the next venture for Dacre and Browne and was the first full time European settlement in the Auckland area.

Browne established an operation with 15 sawyers and employed Māori labour to cut and drag logs from the forest. The timber was intended for spars and to supply the Sydney building industry. The settlement again was a failure for a number of reasons. He chose to negotiate with the wrong people using Hauraki Māori as labour in Te Kawerau territory and also had quality control issues. The final straw for the Mahurangi operation was the arrival of Captain Sadler (Sadlers Point) and the HMS Buffalo in 1834. Sadler outbid Browne for the spars offering guns as part payment. Browne relocated his operation to Whitianga where he built the stone wharf and the first water powered timber mill in New Zealand. Quality issues followed him there and he eventually was driven mad believing that God had deserted him. Browne died in the Bay of Islands a broken man. His brother Octavius came to sort out his affairs and was present at the signing of the Treaty of Waitangi.