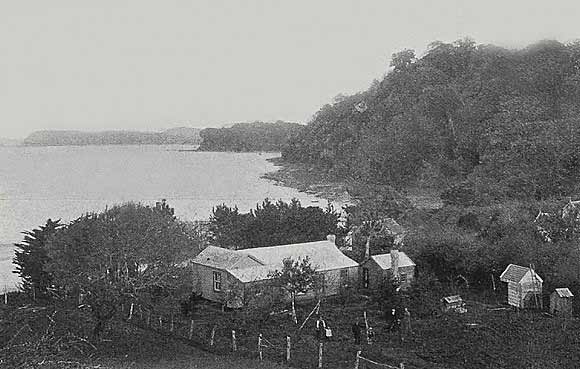 In 1853, George Darroch bought five acres of coastal land at Marriage Bay, on Te Kapa inlet, on the eastern side of the Scotts Landing peninsula. A couple of years later, he commenced building a house on this land. The house was to become known as ‘Cantyre House’). On the shoreline, George set up a shipyard.

R H Locker, in his book ‘Jade River’, records that the bay area where this occurred:

“… later became known as Marriage Bay, because the first wedding on the River took place there in 1854, between [the Darroch’s] daughter Nicholas, and Henry Pulham”

When George Darroch died on 6 November 1877, the property passed to his daughter Mary (who was married to a Capt Robert Quinn).

The newspaper photograph reproduced below depicts one of the buildings on the Cantyre Estate c.1900:

In the fullness of time, Mrs Quinn (who died on 5 November 1916) sold the property to Peter and Catherine Anderson, who owned a neighbouring farm.

Peter and Catherine bought Cantyre as a home for their retirement years … and in due course, they ‘moved in’ and lived together at Cantyre for some 16 years.

The Mahurangi Parish records show that Peter married Catherine (nee Kruber), on 4 July 1892. His age is recorded as 31. Catherine had been born in Bohemia in 1868, and had come to New Zealand in 1873, with her mother and step-father (a shipwright named Thomas Turner).

At the time of Catherine’s death in 1943, it is recorded that she was survived by Peter, and nine living children: six boys, three girls.

Peter and Catherine’s eldest daughter, Mary Anderson (known as ‘Molly’) inherited the property. While she maintained the property, she in fact lived with her younger sister, Kathleen, next door. When Molly died in 1960, she left the property to Kathleen (Moroney), a widow with two children.

In 1965, Kathleen Moroney sold the property to its sixth owners, Rodney + Pam Smith. One of their daughters, Sandy Williams (nee Smith) comments as follows:

“Rodney and Pam … purchased Cantyre … to be used as a holiday home for their family. … There was always a caretaker in residence in the cottage on the property. The family … used the large house for their holidays. Rodney passed away in 1975 and Pam her three daughters with their husbands and children continued to maintain and enjoy the property until 1999 when family started to move out of Auckland. The property was sold in May 1999 to Dick van der Sande who built a new caretakers cottage in keeping with the old house and demolished the old cottage. The Smith family continued to have the use of the property until May 2000.”

Sandy Williams has provided us with these snapshots in time, depicting scenes on the Cantyre Estate during the time that the Smith family owned the property: 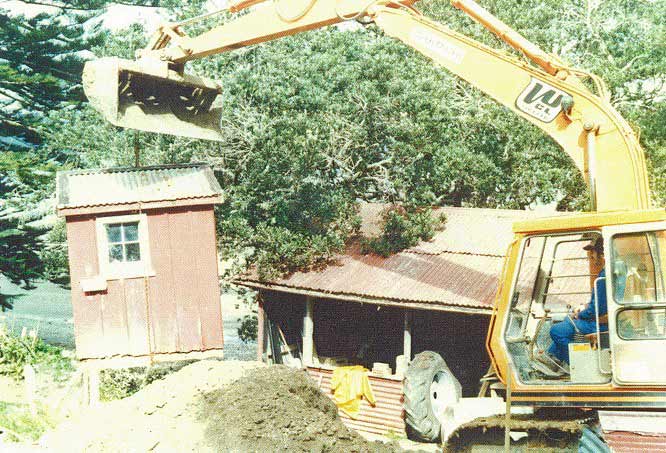 The above picture depicts the old post office structure being moved from one side of the Cantyre estate driveway to the
other. The other building pictured in the photograph is the boatshed that was on the property at the time.

The Sunday Star Times of 17 January 1998 recorded that while the original homestead was built in the 1850s:

Set out below is a photograph that shows a building on the estate. We believe it very likely was taken in the 1930s or 1940s, and most likely depicts that caretaker’s cottage. From a present day perspective, we are unsure precisely where on the estate that building was located. Nor do we know anything else about the scene depicted: 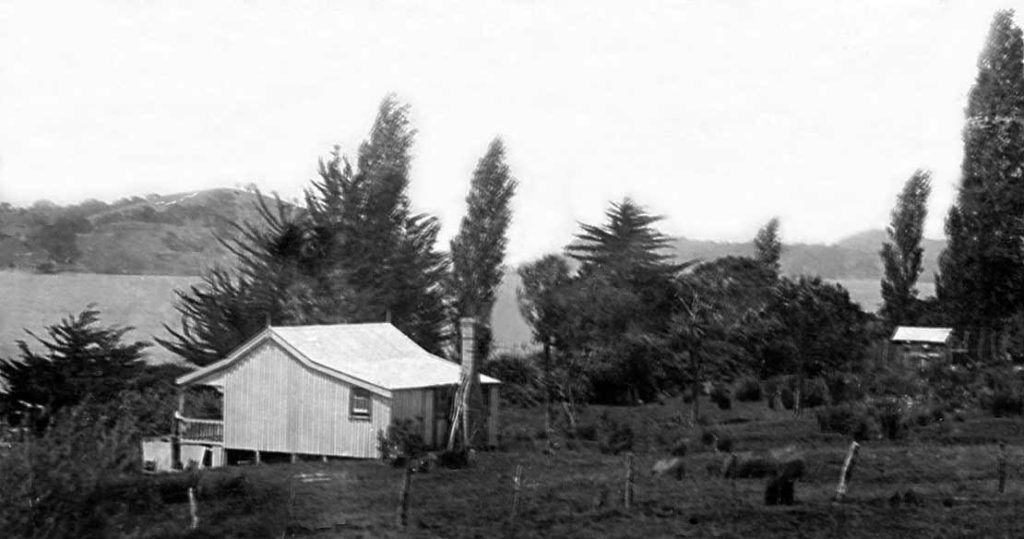 The 1998 Sunday Star-Times article went on to note:


“There is also a large Norfolk pine on the beachfront planted by Sir George Grey while Governor
Many of the kauri piles used to construct Auckland’s wharves were milled on the site.”

Here is a link that will allow you to download promotional images used for late 1990s sale of Cantyre. With respect to those images, local resident Denis Willers comments:

I remember that advertising on the Smith’s sale of Cantyre and it shows the two houses, one of which I had forgotten. The old homestead, which the Smith’s used for holidays, was the eastern one (nearest George Street). Also the one with a hip roof on the eastern end running at right angles to the foreshore. The other house was newer and must have been used for the caretakers.

Here is another view of the old homestead on the property, featuring (in the foreground) the cottage that Dick van der Sande built on the estate:

Not long afterwards, on the night of 24 June 2003, the old Cantyre House on the estate was destroyed by fire. Many in the community felt there never was a credible or satisfactory explanation as to the cause of the fire, with the result that rumours abounded. The community were left to mourn the loss of the historic structures.

In 2004, the van der Sande cottage was sold to a Dr Palmer, who arranged for the cottage to be shipped to Kawau Island. Below are some images taken at the time (a portion of) the cottage left our shores.

The slide presentation below documents the removal of the house by sea:

With the historic homestead no longer the focus of the estate, and the transhipment of the van der Sande cottage to Kawau Island, the entire property became just ‘a large tract of land’ which, over the succeeding years, was developed.